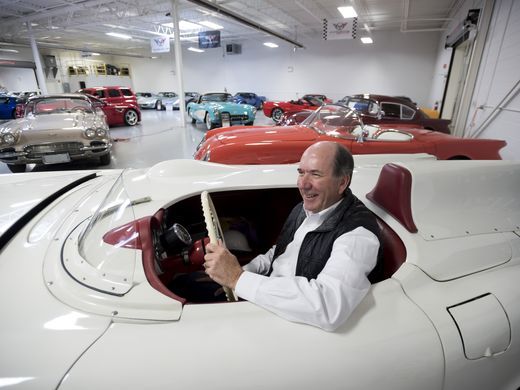 The most remarkable thing might not be the 220-mph Ferrari Enzo in Ken Lingenfelter’s fleet, or even the 1,001-horsepower Bugatti Veyron. It’s that his driving record is as clean as the Bugatti’s hood.

Lingenfelter, 64, loves cars. All of them. But the ones that go faster than practicality or common sense might demand …

Those, he especially loves.

Among other things, that explains how he got expelled from high school. It’s also the reason he’s amassed the Lingenfelter Collection, 250 smoldering Corvettes, muscle cars and exotics — plus an AMC Pacer — that might, if started simultaneously, blow the roof off the spotless Brighton warehouse where about 170 of them lurk at any one time.

The 40,000-square-foot warehouse is not open to the public. Lingenfelter is operating a business, not a museum. Fortunately, the older and more successful he gets, the more he realizes that not even his 2014 Supercharged Chevrolet C7 Corvette Stingray can outrun things like autism or Alzheimer’s. And cancer?

Cancer has already tracked down his family. So maybe 50 times a year, he’ll let a charitable organization throw some sort of small fundraiser among the vehicles — and come April 29, everyone is invited.

From 10 a.m. to 5 p.m., Lingenfelter and his wife, Kristen, will be the genial hosts for an open house that raised $25,000 for the American Cancer Society last time around.

“It’s an incredible opportunity,” says Cheryl Donohoe of the ACS, and not just to collect money. There’s added value to being associated with rare cars and a rare glimpse of them, and to exposing thousands of people to potentially life-saving literature.

She saw checks last year for $100 and more, though there’s no specific entry fee; just make whatever donation your heart demands and checkbook will permit. Or if you can’t get there, wait until October and a similar event for the breast-cancer-specific Pink Fund.

There will be food trucks, a new attraction. There will be gawking. There will be a demonstration of proper polishing and protection. And there will be audience participation, in that historically people drive their own collectable cars to 7819 Lochlin Drive to show them off.

“I can’t get out of the building that day,” Lingenfelter says, and there is regret in his voice, because as noted he is a man who adores automobiles.

Fortunately, so was the last police officer to pull him over.

It was four years ago, he says, in a 25 mph Oakland County speed trap. He was driving a juiced-up Chevy SS Trailblazer with a none-too-subtle Lingenfelter banner across the top of the windshield.

“I can’t wait to see your driving record,” the officer told him. “I got the champion.”

He came back a few minutes later with a sheepish expression and a request. He would not sully Lingenfelter’s file, he said, on one condition:

“Show me what’s under the hood.”